After They Left by Edify Yakusak 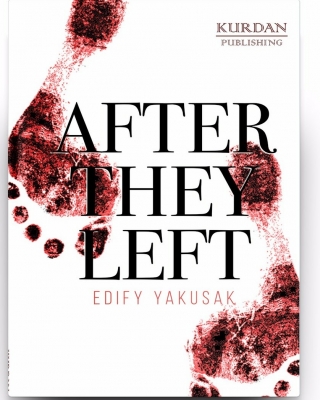 Blurb “After They Left is the heart-rending story of how a somewhat dysfunctional family pulls through an inter-ethnic/religious crisis. In this intriguing tale, the author weaves in all the sides to crisis and survival in Northern Nigeria. The audience becomes more than just spectators but follow in on a journey through a massacre, an IDP camp, as well as a mega kidnapping/human-trafficking syndicate. Yakusak makes a daring entrée as an author by baring it all in this thriller.”

Dialogue Had too much exposition. Written in English, Hausa, Nigerian Pidgin and includes Nigerian lingo.

Themes War and violence; Injustice; Family; Facing darkness and Will to survive.

Editing A number of editing errors.

Plot Mafeng, a young and beautiful woman has her education truncated when she is forced into an arranged marriage by her mother to a Senator, Bot. It is a loveless marriage but she bears two children, Kim and Jugu. Following the death of her husband, Mafeng reunites with the love of her life, Samuel and they get married. Nine months later, Mafeng’s world is shattered when a murderous mob invades her family’s neighbourhood in Jos raping, maiming and killing its inhabitants. The book chronicles the lives of the victims who survived. Separated from their mother, Kim and Jugu wander the forests and hilly back roads of Plateau State, searching for help while their mother is kept locked up in a hospital.

Although a work of fiction, the author sets out to tell the story of the crisis in the North Central of Nigeria and in our opinion, she succeeds. Coincidentally, our preceding review, A Taste of Love is also set in Jos. But this is a different Jos not the tranquil one we saw in A Taste of Love. This is a Jos where sectarian violence tears at fabric of society.

The author narrates Mafeng and her children’s stories using vivid descriptions in a gripping plot that keeps the reader engaged and on the edge of their seats. It’s difficult to second guess what happens next with the plot twists which the author employs without affecting most of the story’s credibility. It is a tale of pain and heartbreak and the reader keeps hoping for respite on the next page and the next and on it goes.

A recurring theme in the book is injustice. Most of the perpetrators of the senseless violence go scot free. The government is unwilling or unable to deal with the insecurity and the attendant refugee crisis decisively, leaving its citizenry at the mercy of violent criminals. The book exposes the horror of these political and civil unrests and the corruption that takes place in refugee camps. We are introduced to characters like madam Mati, who heads an IDP camp and capitalises on the crisis to carry out further injustices against the already demoralised victims. All of this is done with an impunity that leaves one astounded.

In Mafeng and her children’s stories, we see the depravity of man but we also see the resilience of the human spirit. We see the resourcefulness of children like Kim and Phili (whom Kim and Jugu meet at an IDP camp) when faced with dangerous and difficult circumstances. Kim possessed the zeal of ten determined men, navigating her way through seemingly insurmountable challenges.

In a country like Nigeria where news reports of victims of a crisis identify them by numbers, the book puts a human face to the crisis in Jos. It reminds us that the victims are everyday people going about their normal lives. The book is a record of a part of Nigeria’s history in a country where recording and reflecting on historical events is not prioritised. For these reasons, the book is commendable.

Mo The narration needed more work, for a book this intriguing and heart wrenching, the writing/grammar left a lot to be desired.

The constant backstories were played out, I get the need to put into context the reasons behind the characters’ actions, but it muddled the narration and made it choppy.

We also see a few contradictions/inconsistencies in the book. To mention a couple, Bot’s age; and Bot’s emotions towards Mafeng – the author writes that it didn’t change after the birth of Kim but in the same paragraph, also writes that he became more affectionate towards her.

Lady B The origin of the crisis is not revealed in the book, a reader without background knowledge will wonder why the crisis occurred. A brief background in the course of the narration would have been ideal.

The author’s brief reference to African traditional religion when discussing Mafeng’s background was uninformed and dismissive.

The book needed better editing. I found the occasional poor diction and several grammatical errors very distracting and this detracted from the book. A few examples will suffice – writing “dreaded hair” instead of dreadlocked hair and “engorged in flames” instead of engulfed in flames.

You can buy After They Left on Okadabooks (from March 26 to April 1, authors keep 100% of the proceeds from sales of their books on Okadabooks) and on Amazon.