My Sister, the Serial Killer by Oyinkan Braithwaite 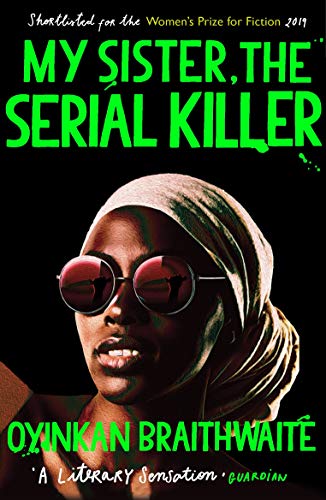 Blurb ‘When Korede’s dinner is interrupted one night by a distress call from her sister, Ayoola, she knows what’s expected of her: bleach, rubber gloves, nerves of steel and a strong stomach. This’ll be the third boyfriend Ayoola’s dispatched in, quote, self-defence and the third mess that her lethal little sibling has left Korede to clear away. She should probably go to the police for the good of the menfolk of Nigeria, but she loves her sister and, as they say, family always comes first. Until, that is, Ayoola starts dating the doctor where Korede works as a nurse. Korede’s long been in love with him, and isn’t prepared to see him wind up with a knife in his back: but to save one would mean sacrificing the other…’

Dialogue Well written and believable. Written in English with smatterings of Nigerian Pidgin English and Yoruba.

Plot Stoic, anti-social nurse, Korede, who is only comfortable around her comatose patient, habitually helps (read enables) her beautiful sister, Ayoola who has a knack for killing her lovers, clean up her mess. Surely her innocent-looking younger sister couldn’t have killed the men on purpose, it has to be self-defence, right?

But when Korede’s love interest, Tade, a doctor in the hospital where she works, becomes Ayoola’s next potential victim, Korede has to make a difficult choice…

Mo I must tell you guys that listening to an audio book is excruciatingly painful. Of course, having the attention span of a fish, like I do, doesn’t help! Long story short, I couldn’t find the e-book in any online store in Nigeria, so I resorted to buying the audio book because I wanted to know what the fuss is about.

Set in Lagos, Nigeria, this episodic first-person narration by Korede, our enabler older sister, makes this satiric dark comedic book worth it. The book cover is a win, add the title and that’s a double win.

The short chapters made the pace fast, and it became a quick read, or shall we say listen, in my case. Oyinkan uses flashback techniques to give us a glimpse into the childhood of Korede and Ayoola and how it affects them as adults.

The sisters are polar opposites. Ayoola is the beautiful black widow, not only does she know it, she also wields it like a weapon. Her character is manipulative and nonchalant, she feels no remorse for her expenditures… err murders, while Korede is level-headed and obsessed with cleanliness (which probably explains why she cleans up Ayoola’s mess).

The characters were multi-layered including secondary characters like Murtha. This book is very much about sisterhood and the familial bond, it’s also a social commentary that addresses our patriarchal society. If you are looking for a light-hearted book to read while on a holiday you should read this book.

Lady B For the longest time, I resisted reading and reviewing this book even though, Mo wanted to read it immediately it was released in 2018. I was put off by the thought that a serial murderer could be portrayed in a book as anything other than an evil person, as I had read about the lightness with which the story is narrated in comments on social media.

To enjoy this book, I think I had to suspend my sense of morality and my understanding of how the world should be, in a sense. It’s not your average crime fiction but it is an interesting read. Oyinkan is a good storyteller and despite my revulsion at the crimes and the role Korede played in enabling Ayoola, I still wanted to keep reading and find out how it ended.

Mo It didn’t help that in between chapters it read like short diaries, with a very thin thread connecting them. This may be because of the narrator. Also, I felt the sisters’ actions, especially Ayoola’s were sloppy, which wasn’t noticeably thrilling neither was the narration somber.

I know it was meant to be dark but it ended up being a comedic satire that didn’t take any of its themes seriously. I had hoped that the obvious psychological effect of their childhood would be explored as both sisters seemed to be suffering from a mental baggage in different ways.

This book should read as a lesser intellectual version of YOU by Caroline Kepnes.

Lady B The implausibility of the parts of the story about the murders and the cover ups. I really couldn’t see how the sisters could get away with it so many times without getting caught.

Oyinkan offers an explanation for both Ayoola and Korede’s actions by giving us a glimpse of their relationship with their abusive father but it didn’t satisfy me.

My Sister, the Serial Killer is available on Amazon and Kobo. It is also available in local bookstores.