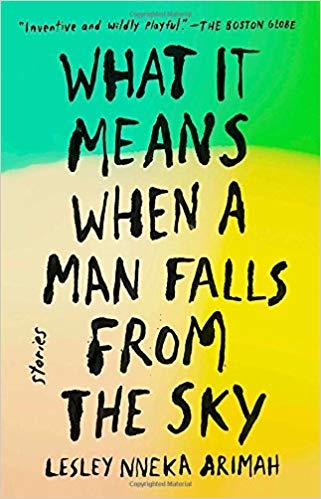 Blurb “A dazzlingly accomplished debut collection explores the ties that bind parents and children, husbands and wives, lovers and friends to one another and to the places they call home.

In “Who Will Greet You at Home,” a National Magazine Award finalist for The New Yorker, A woman desperate for a child weaves one out of hair, with unsettling results. In “Wild,” a disastrous night out shifts a teenager and her Nigerian cousin onto uneasy common ground. In “The Future Looks Good,” three generations of women are haunted by the ghosts of war, while in “Light,” a father struggles to protect and empower the daughter he loves. And in the title story, in a world ravaged by flood and riven by class, experts have discovered how to “fix the equation of a person” – with rippling, unforeseen repercussions.

Evocative, playful, subversive, and incredibly human, What It Means When a Man Falls from the Sky heralds the arrival of a prodigious talent with a remarkable career ahead of her.”

What worked? Sequel to buying this book, over a year ago, I had read mixed reviews on Twitter about the book. Some people loved it and others hated it, and this made me hesitate to read the book even though, it has been on our reading list since thy kingdom come.

What it Means When a Man Falls From the Sky is a collection of twelve short stories narrated in the first, second and third person.

In this collection, Lesley tries to do something different with the way she narrates the stories. For example, the first story, ‘The Future Looks Good,’ starts at the end and traces backwards. It is one of the better stories in the collection. Perhaps, I should say it is one of the few stories which held my interest in the book.

One other story I liked, surprisingly since I rarely read speculative fiction, is the story which the book was titled after, ‘What it Means When a Man Falls from the Sky.’ It was one of the few stories which had a beginning, middle and end that was coherent and understandable to me.

‘Windfalls’ which was incredibly sad also worked as the characters felt real. The examination of the theme, motherhood, in ‘Windfalls’ presents a direct contrast to the experience of the children in ‘Buchi’s Girls.’ I liked ‘Glory’ for its open-ended conclusion and ‘Redemption,’ the final story for its relatability.

Lesley showcases her descriptive language skills in this collection of short stories focused on the humanity of the characters.

What didn’t work? One thing which some stories lack is coherence. As individual scenes/paragraphs, the stories convey something worth examining, but it was difficult to get the full picture. Worse still, I got to the end of some stories wondering “what was that about?”

I did not find this a compelling read. I struggled to read this in one week and it’s not a big book. My least favourite stories were ‘Who Will Greet You At Home,’ a magical realism story about a woman desperate to have a child and ‘What is A Volcano,’ a story about the goddess of ants and the goddess of rivers’ feud. I didn’t understand what the latter was about when I got to the end of the story.

I still don’t understand how the mother in ‘Wild’ was making ‘carpet angels’ on her own. Does ‘carpet angels’ mean anything different from what the urban dictionary states?

What it Means When a Man Falls From the Sky is available on Amazon and Kobo.

Have you read What it Means When a Man Falls From the Sky? Please share your thoughts in the comments section.