Jewel from the Ghetto by Qudus Oko-Osi 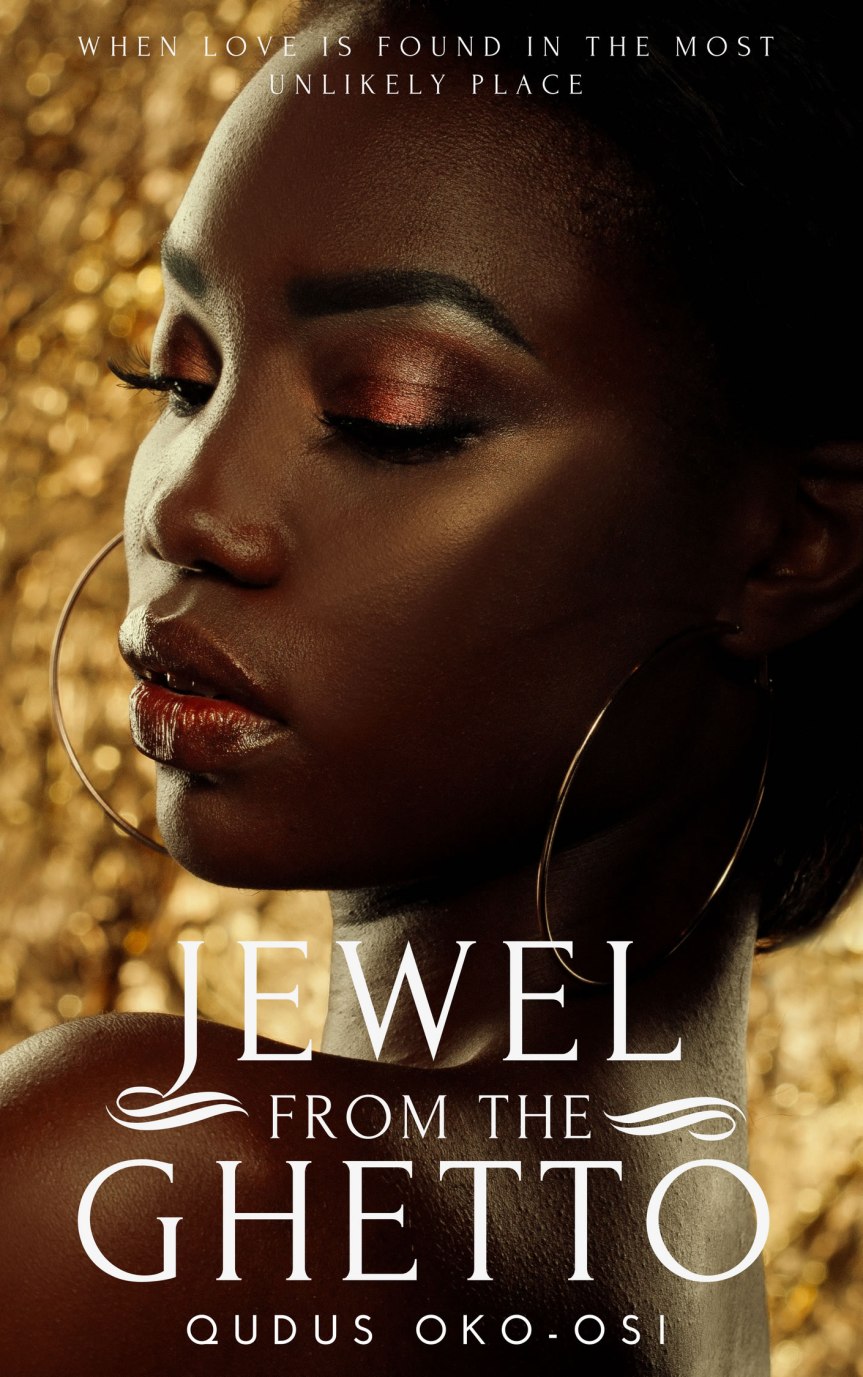 She touched him. It sent bolts of electric charges through him and flung him across oceans and mountains to cloud nine. He felt like pulling her close and kissing her succulent lips affectionately.

The feeling was mutual.

Her searching look spotted something deep inside him; it was an inextinguishable fire and it consumed her in an instance. It sent sparkling current down her spine and took her breath away. Her legs wobbled. Her strength waned. She could only pray she didn’t fall; she had never felt anything this strong before. On a second thought, falling might be a good idea. It only had to be falling into his strong arms and being whisked away into the land of fairy-tales!

But wait a minute! What if in the process of finding love, Simisola incurred the wrath of the wild, ever-scheming, ‘Slay Queen’, Shakirah? Or she had to contend with the rejection of the super-rich and highly opinionated Mrs Williams? Or the schemes of the popular but hubristic American-trained TV presenter, Nicole?

If you enjoy reading about fast-paced romance full of suspense, twists-and-turns, and the hullabaloo of street life, then purchase this book.”

Dialogue Written in English, Yoruba (translated) and Nigerian Pidgin. The dialogue was juvenile.

Plot Yemi, a man in his 30s from a wealthy family, who just returned from America, takes a detour on his way to a meeting one day and passes by a beauty salon, Pink Roses with pictures of its workers as models on its outside walls. He finds this fascinating and stops at the salon one day to ask about a worker whose picture he saw on the wall, Simisola. Simisola is a young hairdresser at Pink Roses who had dropped out of secondary school because of financial constraints, and was working to support her poor parents and siblings who lived in the village.

They start dating but there are hurdles in the path of their relationship. There’s Yemi’s mother who wants him to marry Nicole, her friend’s daughter, from a wealthy family, and Shakirah, another hairdresser at Pink Roses who wants Yemi for herself and will stop at nothing to get Sinmisola out of the picture.

What worked? A few of the twists were unexpected in this largely predictable romance novel. Honestly, we’ll say maybe the plot? But that’s not original either. Definitely the book cover, it’s gorgeous.

What didn’t work? This book parades itself as something it is not. The writing is ambitious but it just doesn’t hit the mark. It was a difficult book to read because of the writing style. The book is narrated the way the blurb was written so you get a feel of what to expect by reading the blurb.

If you aren’t Nigerian, you may find it difficult to understand the Nigeria-centric expressions such as “Yemi, a tall, fresh, and good-looking young man with an American accent,” “stupid bike,” “silly nail,” “lips were as dark as hell” etc.

There was too much exposition in the narration. Qudus was having a conversation with the reader but not in a good way as it was more of a monologue. There is no room to use your imagination; everything is spelt out, exclamation mark and all.

Outside, he mounted Shakirah on his motorbike and the next second, they vanished into thin air!

Character development was also not properly done which made it difficult to relate to the characters. The descriptions of the characters also left a lot to be desired. Some hairdressers at Pink Roses were described as “equally pretty” and one character, Iya Afusa was described as “extra-large.” At every turn, we were reminded that Simisola was from the ghetto.

There were loose ends in the book which weren’t tied up. Things just seemed to happen a number of times. Yemi fell in love with Simisola at first sight and that was that. We don’t know when Simisola fell in love (perhaps, that was after he gave her the first cheque).

The issues with the writing may have been addressed if the book was edited by a competent professional editor. There were also grammatical and typographical errors.

This book didn’t work for us, it was a tedious read, and we aren’t even literary purists. Perhaps, we aren’t the intended audience.

Jewel from the Ghetto is available on Okadabooks.

Have you read Jewel from the Ghetto? Please share your thoughts in the comments section.

Many thanks, Qudus for sending us a copy of your book in exchange for an honest review.