The Pearl Ring by TM David-West 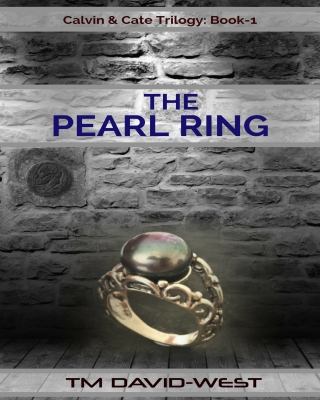 Blurb “Deputy Superintendent Calvin Vaikosen has a menacing neighbourhood robbery gang to uncover and yet, he’d been ordered to go play sleuth because the multimillionaire Yinka Edwin-Maurice had lost her pearl ring. With her prime suspect being her soon-to-be step-granddaughter, Cate Makinde, and the evidences mounting against Cate, Calvin has to pull out his detective hat and plug on his never-failed sixth sense if he is going to unearth the real pearl ring thief. Enjoy this first book of the Calvin & Cate series.”

Dialogue Had some ambiguous and unrealistic lines.

Editing A number of errors. Needs an editor.

Plot A theft of an expensive pearl ring has occurred at the Edwin-Maurice mansion and matriarch, Yinka Edwin-Maurice calls the police in to investigate. Yinka believes Cate Makinde whose mother, Anna is the fiancée of her son, Temitope stole the ring. The investigation leads to the unearthing of secrets.

What worked? We are back with another ‘Whodunit’. This time, a light read. The Pearl Ring is the first book of a trilogy but could be read as a standalone novella. If you are interested in mystery books, read our review of Chasing Facades.

Before we chose this book, Mo and I had tried to read two other books by this author, both romance but neither worked for a review. So we settled for this book. We figured less than 200 pages and a whodunit theme should be just fine.

The plot is simple and straightforward. A theft is a crime, yet in the light of the state of security in Lagos, one can’t help but feel it is frivolous for the police to be spending time on this case. Especially as there had been no break in. Detective Calvin Vaikosen expresses a similar view which makes the story more realistic.

The discussion of a societal issue (which we won’t reveal as it would be a spoiler) gave the book some depth and whilst I disagreed with two of the major characters, their viewpoints were authentic in the Nigerian context.

Oh… a minor character in the book has the same name as me. 🙂

Mo This would have been an enjoyable read if the use of complex words was not centre stage. Not to say you can’t enjoy it, in fact, if you can overlook the unrealistic dialogue you may enjoy this book. The dialogues are ambiguous and unrealistic for an easy read.

TM has great storylines, the execution is however a hit or miss. Sometimes, she gets it right, other times, it’s lost under unnecessary description of the bathroom wall. I think Iroko TV can easily adapt her stories into movies but the script writing will have to improve to more realistic dialogues.

Lady B The major flaw in this book is the editing. Apart from the usual editing errors like “chunk” for “chuck” or “section” for “session” and other typos, the writing style needs some improvement. “Flats” is not a correct short form for flat shoes. “Severally” does not mean several times. How does one “vaguely grimace”?

There were odd phrases like “towing the lane,” only phrase I could think of close to it is “toeing the line.” What does “the slouching sound of approaching feet” mean? “Tempestuous” is used incorrectly in this sentence “But her tempestuous holler only served as further amusement for the irrepressible young men.”

The author uses complex words as synonyms for simpler words but misuses them. For example, “a trifle arrogantly” and “a trifle amused.” “Trifle” is not a synonym for “little.” “Camaraderie” is used presumably as a synonym for “friendly” in this sentence “He gave the young man a camaraderie slap on the back,” unfortunately, it doesn’t work.

Writing with complex words is not only off putting-as it makes reading more difficult-it leads to errors if one doesn’t have a mastery of these words. These complex words when included in dialogue, make them unrealistic and pretentious as people don’t speak like that in real life.

The hint of romance gives away the mystery in two ways: the detective will usually not be involved with the perpetrator, and a trilogy suggests the obvious suspect is not the perpetrator. So there isn’t that much intrigue in the novella.

You can buy The Pearl Ring on Okadabooks.